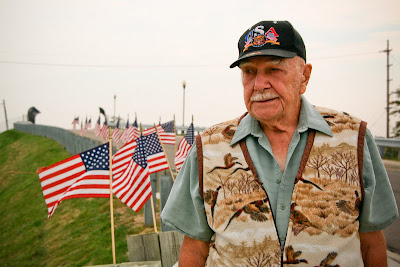 6 years ago my folks moved from my childhood home in Redford to Northville, Michigan. A railroad track runs through their new community and the two halves are connected by a bridge. My dad lives just over the bridge. And apparently he has been decorating! 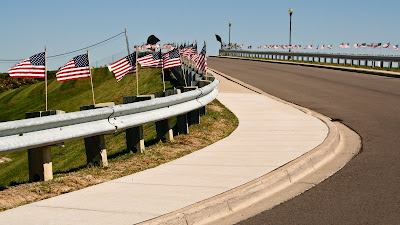 This sight did not surprise me as we drove up to his house last September. My dad is all about the Flag. I’m pretty sure I knew how to fold a flag before I knew how to tie my shoes.

And it seems that my dad’s patriotic display has been getting him all kinds of attention. Last summer, there was an article written about him in the local paper. I don’t think we were in the door 5 minutes before he was showing me a copy. I would have put a nice link here for you but apparently the South Lyon Newspaper only has a 14 day archive. So carpel-tunnel be damned – here is the article:

From the time he was a boy, World War II veteran John Reiff has had a love affair with the American Flag. Reiff, who served in the 302nd Combat Engineers Company in the Pacific Theater, recalls walking to school through a small business neighborhood and watching as shopkeepers put out the flag for display. They did this daily. He also recalls that on Flag Day, his neighborhood was a riot of color with American Flags on display at all homes. In his classroom, the Pledge of Allegiance was not just a routine occurrence, but was explained by the teacher as to why they recited this pledge each and every day. From these experiences, Reiff internalized a love for the flag and an enduring appreciation for what our flag represents. He continues that dedication and appreciation to this day.

Fondly referred to as “The Flag Man” by residents of Northville Crossing Manufactured Home Community, where he has lived for five years, Reiff’s respect for the flag, and what it represents, is obvious. Adorning the bridge that connects the two sections of the community are more than 150 American Flags: one for each Michigan soldier that has died in the Middle East conflicts. Reiff explained that each month, the VFW in Redford sends him the names of Michigan soldiers killed in conflict. For each one, an American Flag is displayed. He said the best months are the ones where no names are sent to him.

Reiff began his active work on behalf of Old Glory one Flag Day many years ago. His daughter had a friend visiting who asked him why so many flags were being flown in his neighborhood. He realized that the young lady had no knowledge of Flag Day and what it represents. He decided to change that. He put together a presentation about Flag Day and the American Flag and over a period of time, visited every school in Redford explaining to students how our flag came to be and what Flag Day represents.

Reiff’s friends and neighbors often contribute money to help purchase his flags. Recently, one resident presented him with 5 dozen flags to help in his effort. And his display of flags on the bridge sometimes receives unique acknowledgement. This memorial day, four restored World War II planes that had done a fly over in Milford, flew over his house. Reiff’s wife Virginia watched as they flew over, slowly turned and came back low over the bridge. As they passed, all four tipped their wings in salute to the flags. She said it was one of the most amazing things she had ever seen.

When asked what the flag really means to him, Reiff replied, “It’s just a piece of cloth, but it has represented our Country for over 200 years. The flag remind me of the freedom, opportunity and privilege we all enjoy living in the United States. I believe that each and every one of us should revere the Flag and look at it with the highest respect.” Reiff shows his respect by taking the flags down every 10 days and inspecting them to assure they are still in good condition.

As he said, the flags must never be displayed in a manner that restricts their furl. For this reason, all of his flags fly freely and proudly as a symbol of one man’s dedication and respect for the Red, White and Blue.

While I don’t remember the incident with my friend, I do remember him coming to my school and giving a presentation on the flag every year. He was so proud of this article and told me that teachers in the area were reading it in classrooms. A copy was sent to my Aunt Ellen in Sacramento and it started making the rounds in California too!

I went out with him a couple days later as he took the flags down for the winter. A week later my parents left for Florida. I’m sure a copy of the article went with them. 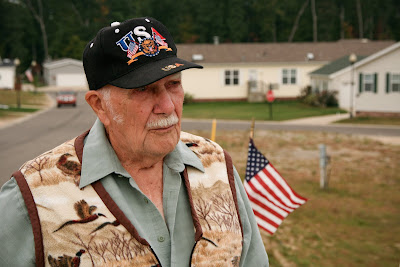 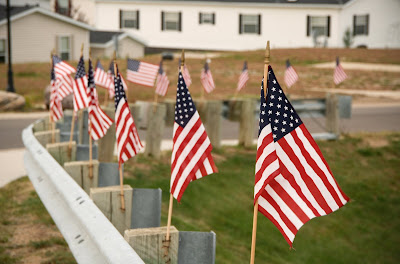