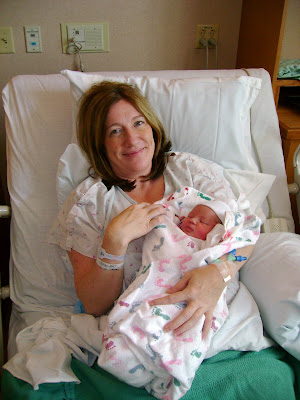 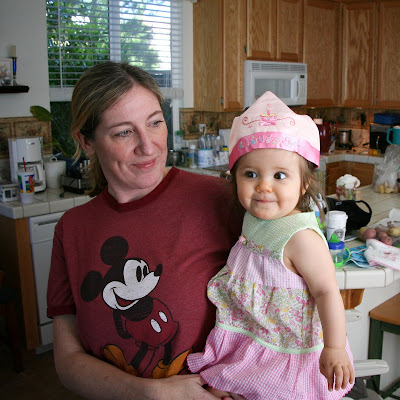 Can you believe it?! Erin’s 1st birthday was yesterday; although we celebrated on Saturday. This whole leap year thing made it easy to claim both days as appropriate for celebrations. We had the cake and presents on Saturday and the much anticipated flipping of the car-seat ceremony on Sunday the 13th. Ok, it wasn’t much of a ceremony; Erin and I were inside while Chris re-installed the car-seat to its new forward-facing position. Yay. Of course now I can barely operate the straps because everything is backwards! Parenting is fun.

So, the big party? Not so big, it was just the 4 of us and Chris’s folks. But that was ok – more cake for us! And of course I made the cake because that is what I do. I am most mom-like when it comes to birthdays. I will bake for you! You want a cake? Great – what color? Need 31 cupcakes for you class? No problem. And this time, since Cook’s Illustrated just happened to have a recipe for chocolate frosting, I made the frosting for my cake (still from a box) from scratch! (Yes, that particular CI had a cake recipe too but it was yellow and we are chocolate cake people) And may I just say, that frosting? Way too chocolaty!!! I know, many of you can’t comprehend such a thing, but dude, it was rich. And I have a ton left over! And according to Chris throwing away frosting is some sort of cardinal sin! Gads. He was more than ready for me to make a batch of cupcakes to put under all that frosting. Like we really need 2 dozen cupcakes hanging around the house. I think I’ll just throw that tub-o-frosting in the freezer. Someone has to show some restraint around here!

I’m still trying to wrap my brain around the fact that Erin is 1. Too fast! We bought Erin her first doll house and quickly declared the Little People Dad a nerd because of his sweater-vest. She also got one of these ride-on contraptions from Grandma and Grandpa. She is all over pushing those buttons* but not that interested in riding on it. Yet. And they also bought her one of those Corn Poppers! That is not nice!! And of course Kyle is having great fun playing with all her new toys. Goober.

I would like to say that I’ll finish sorting through the gazillion photos this evening, but Kyle has a baseball game**. You just might have to wait until Tuesday night to see more of Erin in all her one year old, toothy, chocolate covered, party dress wearin’ glory. But I can guarantee you that it will be well worth the wait!

* Buttons. Really, that is all that little girl wants to do – push buttons. Eventually she’ll find mine! But for now, her favorites are the ones on the tv and dvd players. Great.

** The Giants are 0-5 or is it 6? Either way, they are having a rough go of things so far. But Kyle is doing really well for his first season playing. He needs to gain confidence at the plate and get more aggressive, but he is doing fine when out in the field. He caught a pop fly to right field last week in the first inning. I have vowed never be late for a game again! And when I did get there he was playing 3rd base! The coach has said he was going to be starting him from now on because he’s worked really hard and nothing gets by him. Way to go Kyle!

1 thought on “Typical. A day late and 24 cupcakes short.”