Or – The beginning of the end…Last night I bought Kyle his first stick of deodorant.
We stood there blocking the aisle while he sniff-tested a dozen different scents after I had narrowed the choices down to a couple brands. He was so pleased. He won’t even let them bag it with the rest of the groceries; he carried it all the way home.So, there on the bathroom sink, next to his toothbrush and his retainer, sits a stick of Right Guard Fresh.

How did this happen? Where did my baby go?
Now it’s all pre-teenage attitude, eye-rolling, and deodorant. What’s next? Pimple-cream? Gah.

This morning he was telling me how the majority of people mispronounce Johann Sebastian Bach’s last name. He even has opinions about the president and the war in Iraq. WTF? I probably didn’t even know who the president was when I was 9.

At least I can still give him a hug and peck on the check every morning – in front of everyone!

I was going to post a baby picture, but then I found this one of Kyle and his kindergarten teacher. Ha! Do you still doubt that he has three sixes on his head? 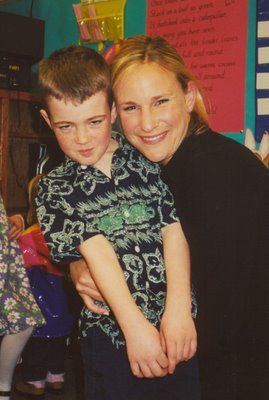 It’s all for you Damien!