I have a cold. Or the flu. Possibly a random plague. I blame Julie. She cursed me – a pox upon my house no less! Sure, sure, she promptly lifted the curse, but obviously not fast enough. Because a couple weeks ago Kyle got sick. And Kyle never gets sick! And then while we were in Santa Cruz, Erin started getting sick. She was sick all last week, poor baby. And now I am sick. So yes, I blame Julie. Although I believe she has paid for her sins. She was also sick last week. And then yesterday she called me for tween anecdotes for an article she is writing. Ha! she ended up listening to an almost certainly feverish me babble on about Kyle for 30+ minutes. I have no recollection of what I said to her. More ramblings of a lunatic. She should have been recording that shit. Chopped it up, added some random images and a funky electronic dub, uploaded to YouTube, and become an instant internet phenomenon. Oh well, maybe next time she’ll be ready for me.

I have been collecting images of Erin in all her hats. Girl likes to wear hats! And if Chris wants to point his genetic blaming finger at me for that one, well I’ll take it. Hats are cool. Use to wear them all the time myself. Still have a couple funky hats, but most are of the practical and warm variety now. Hmm, will have to remedy that situation at some point. More funky hats for the people! Anyway, Erin loves to wear random hats around the house. She’s also obsessed with her bike helmet. Shocking. This hat was pilfered off a stuffed dog that Kyle gave her. It always cracks us up when she wears it. She looks like a stoned snow-boarder, or one of the McKenzie Brothers. 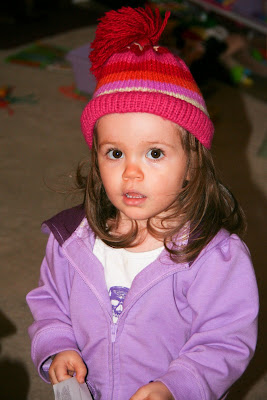 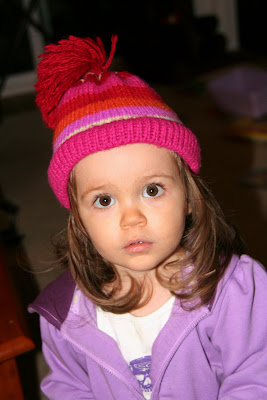 And that’s all I’ve got for ya today. You too can blame Julie. Or Sharon. Sharon has not yet paid for all the suffering she’s causing me. I’ll tell you more about that tomorrow. Or as soon as Julie’s pox removal cream starts working. The nice man on the TV said the results were guaranteed or I’d get my money back less shipping and handling. That’s a good deal right?

Somehow we made it. Merry Christmas and all that j

If all goes as planned, we’ll be living in a hou

Reach out and touch someone Fright Fest Day 21 - A