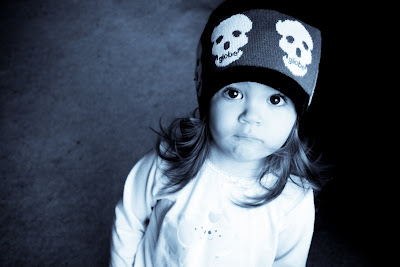 If you encounter this baby in a dark alley – run the other way. That baby will mess you up! At the very least, she’ll steal your hat.*

This hat used to be mine. I bought it in Fort Bragg several years ago. I gave it to Kyle last year to take camping. At some point Erin got her hands on it and won’t give it back. That’s cool. I’m not gonna try and take it away from her – have you heard her scream?! I’ve got another hat.

I took these photos on a Saturday morning – this is how the baby kicks it around the casa. 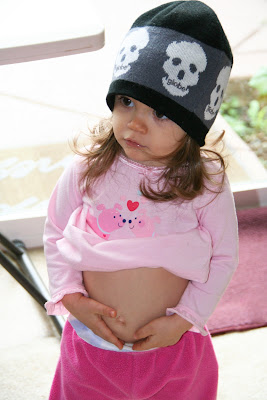 So, I was going to tell you about Sharon and why she should pay for my suffering. Well, somehow she managed to get me to agree to be a vendor at Mather Golf Course’s Second Saturday Event on March 14th. omfg. How did that happen? I don’t drink, so I wasn’t drunk. Why would I agree to such a thing? Selling my photographers? Sure, it sounds so simple. Wrong. It is a major pain in my ass! And it will probably be the death of me. Or a small part of me. Hey, I’m definitely losing sleep over it! I’m not even going to tell you about the traumas I am having over printing these photos. Then there are the logistics of displaying the prints. And at some point I’m going to have to figure out pricing! I am so going to kick Sharon in the shin the next time I see her. Damn it! She was just here on Saturday and not only did I NOT kick her, we fed her abalone, and then I took photos of her (106!) so she would have a new profile pic for freakin’ Facebook! Ugh. Now, I’m really mad. I made her look good, and I’m sitting here having heart palipitations while some Canon bigwig is buying another Mercedes on my dime!

Ok, maybe it is time for a little yoga break. While I go stand on my head, you can ponder the cuteness of the Bean. In this shot she looks just like Chris! 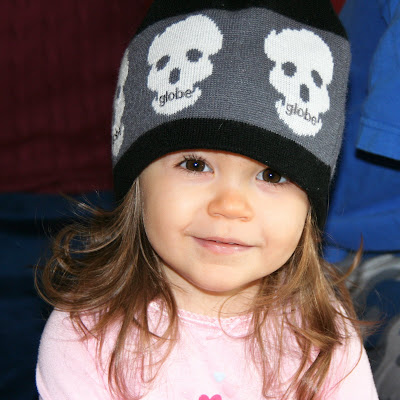 * She’s also been known to sticky-finger a cell-phone out of a purse without anyone noticing. Next up: Mug shots!