Last month Chris remodeled of our home office. He got rid of his desk and built a 2 person desk the length of the far wall. My printer and cabinet of drawers divide the space into His and Hers. And with the man on a mission, I got my Christmas presents early! 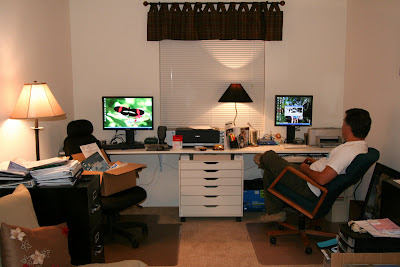 We have been promising Kyle that we would set up his computer downstairs on the homework desk for ages now. (“His” computer meaning my old Dell from the time before Chris) We also needed to get me a computer of my own as I was hogging Chris’s machine, affectionately called “our” computer, with all my photo work. And not only was I hogging all the computer time, I was bitching about said computer. Loudly. To anyone who would listen. Because Chris’s computer is old and slow and just couldn’t handle my photo editing software or the amount of photos I was storing on the hard drive. The computer would constantly lock up causing much cursing. It would take me forever just to edit a few pictures. There was much unhappiness. And there was talk of a laptop and monitor. But then in one of those manna from heaven moments – we were sent home from Santa Cruz with one of the in-law’s extra computers. (The move of their permanent residence to Santa Cruz where they already had the weekend place produced a lot of ‘we have 2 of these now – take this home.’ Ask me about all my new kitchen gear!) And suddenly we had enough machines for everyone. And without the cost of a laptop to worry about, Chris splurged on my new monitor!
Behold! The Samsung SyncMaster 245BW. 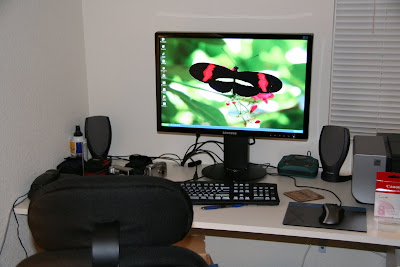 Oh yes, it is the Maserati of monitors and I couldn’t be happier!
And to bring the computer up to speed, Chris ordered a new video card, added a gig of memory and a second extra large hard drive. And my computer goes vroom. I can now get through a batch of photos in no time! Life is good! 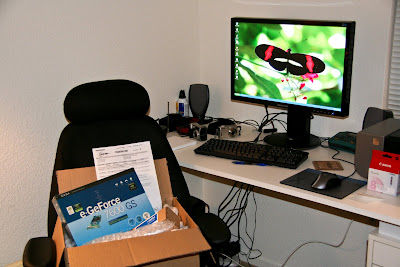 I think Chris would put it this way:

New monitor and graphics card… $$$.$$
Chair, floor mat and mouse… $$$.$$
Getting her off my computer… Priceless 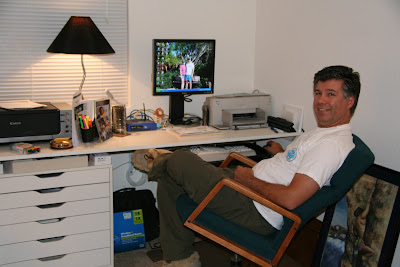