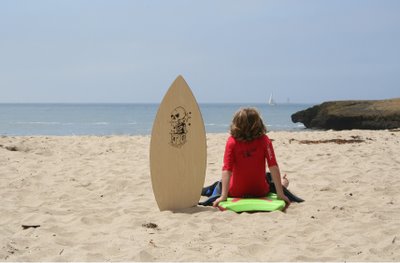 We had a lovely time in Santa Cruz this past weekend. Not only did we get to see Chris’s folks, but also his aunt and uncle, cousin and her family and then some. We spent both afternoons at the beach. Kyle got a new skim board and Chris’ dad was the last to get out of the water on Saturday. And of course we ate too much. The only thing that wasn’t perfect was the fact that both Chris and I had to work on Monday. Oh well, I can’t complain – we are leaving tomorrow for 5 days south of the border.

I’ve been spending most of my time on Flickr this past week. In addition to adding photos; I started to explore. Wow. You better have a jumbo bag of breadcrumbs and a hydration system because you could get lost out there. I’ve added favorites, made contacts and joined a few groups. I found this guy in Detroit and somehow has access to abandoned buildings! Oh the beauty of urban sprawl. I told Chris that these were the pictures I wanted to be taking. I think I mentioned that I was getting a bit burned out on taking ocean shots. My surrounding weren’t inspiring me and I was feeling frustrated. And then I found the Utata group. They have projects and I am so excited about them. In addition to weekend projects there are the Iron Photographer Projects. They give you 3 elements that you need to include in the shot. The latest elements for IP-06 are 1- round object, 2 – shot through a window, and 3- the color red. So, while walking around the block I found this.
I am quite pleased with the photos I took this weekend. Santa Cruz sprawl will just have to do. Before we left on Sunday afternoon, Kyle and I went for a walk and let him use my old camera. He took some great shots. I’ll try to post some when we get back.

And the 4th was a blast – HA! No pictures, but a wonderful dinner with Cynthia – thanks again chickie! Let’s climb next weekend. And then have abalone. And more Bananas Foster!! Damn, that girl can cook.

Have a great week. I’ll be taking more pictures, nursing Coronas and trying not to get burned.

Somehow we made it. Merry Christmas and all that j

If all goes as planned, we’ll be living in a hou

Reach out and touch someone Fright Fest Day 21 - A