Wow, we were barely unpacked from our last trip to Santa Cruz (hey remember Christmas? yeah that was only like 2 weeks ago!) and we turned around and went back last weekend (check it – the grandparents still have their tree up!). Seemed rather sudden, but the waves were pumpin’ dude. So, we threw our bags in the van, and 3 hours later were back at the beach. It appears that our travel plans will now be based on the swells. Bitchin.

And you know what else is bitchin’? My in-laws. In fact I’m upgrading them. They are henceforth to be referred to as the uber-in-laws. Cause my in-laws are better than your in-laws and that’s all there is to it. There is no need to go into any long drawn out list of how and why they are better, no need to mention mercury glass, or Sigg bottles piled on top of all the love, all I need to tell you is that they read this blog. And they saw my last post and they were ready for me when I came back.

While the boys were surfing, Bob and Paula took Erin and I to the Forest of Nisene Marks State Park so that I could get my big tree fix! That’s right, there is a redwood forest right down the road – 6.25 miles from the comfy bed I sleep in! I knew there were redwoods nearby, but this was right there in Aptos. Behind Fleur, and that little shop were I spend too much money on fancy barrettes for Erin’s hair. Happiness was so close all this time!! So we strolled thought the trees for an hour and all was right with the world! I’m now thinking we’re gonna have to put bike racks on the van. 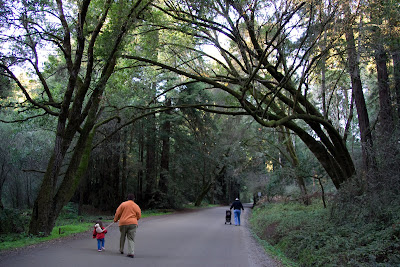 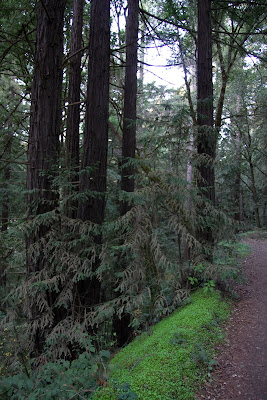 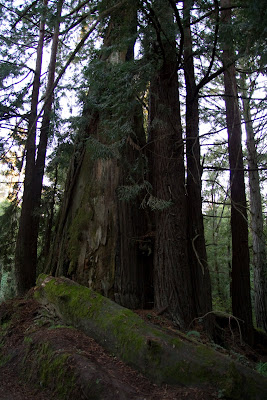 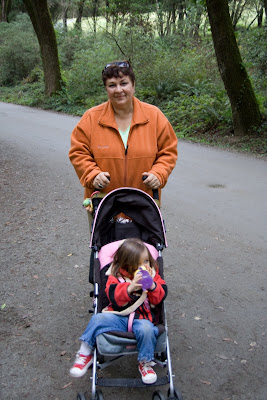 And the next morning, sans fils, Chris and I went back downtown and stumbled upon a street fair. Oh the joy. I picked up a couple books. Snapped some pictures. And then found the treasure of the day. An Argus 75 Twin Lens Reflex camera. Hot damn! I can’t wait to try this baby out. Just looking though the ground glass viewfinder makes me happy. Chris said I actually “squealed” when the guy said it was ten bucks. I can believe that.

So yesterday I dropped off the first roll of film from the Supersampler* to be developed! Then I stopped by the camera shop to get a quick lesson in working the new Argus and picked up some more film.

Ya know, I’m gonna have a heck of a time convincing Chris I need to upgrade my digital camera body sometime in the future if I keep buying cheap film cameras.

I can stop any time I want to.

* for the record – that camera was a Christmas present. Oh! and the Holga was a gift/payment for design work done. So technically, the Argus is the first film camera I have purchased. So there.

** because I have far too much time on my hands, I found California Uber Alles on YouTube. Damn, that’s some funny shit.