In my ongoing effort to shift my brain’s power balance back to the right hemisphere, I took my first online art class last week.

I say “ongoing”  because first there was this:

I might be called the Technique Queen, but my friend Lisa is the on-line class champion! She is always in the midst of one or two classes. (She also goes to amazing out of town workshops/retreats! I’m only a little jealous.) So, when my school semester was over in June,  I was jonesing  to paint and get loose after all that time doing the technical work of printing and toning all the photographs for my upcoming solo show.  After seeing all the cool new paintings Lisa had made, I asked her to show me some of the new techniques she was learning. We scheduled an Art Day and I bought some acrylics (but I’m an oil girl!!) and a new canvas. I went to her house on the appointed day and we set up in her backyard. I slid the easel into some shade and tried to groove with this whole we are outside, with all the sunshine and fresh air business (CHANGE! DONOTLIKE!) and she began coaching me in the Flora Bowley technique of Brave Intuitive Painting.

Went back a couple days later for another Art Day with an additional two friends who have also been brainwashed schooled in the “let go” “spiral out” painting technique from hell! Flora.

To say I struggled would be an understatement. I am more than familiar with a painting’s “ugly phase” and how every time you start working again on a canvas you “ruin” it. But this was bad. And I was getting mighty discouraged. You are supposed to find and isolate small portions of the canvas you like and paint around them. Keep working until you “see” where the painting is going. That’s all fine and good, but I hated all of it! So I went home frustrated and ignored the canvas for a week.

Then with a full cup of coffee and the music obnoxiously loud, I started to paint again. Found the path and ended up here: 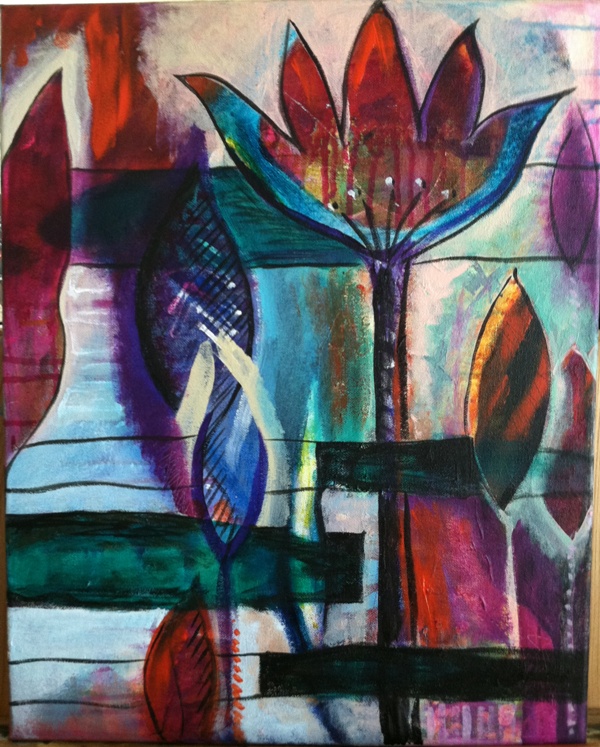 Hmm, not bad. And because I am a known glutton for punishment, I decided to do it all again. So the next time we were in Santa Cruz, I picked up a cheap easel to keep down there and a couple new canvases. Painting outside it much more bearable on the coast! 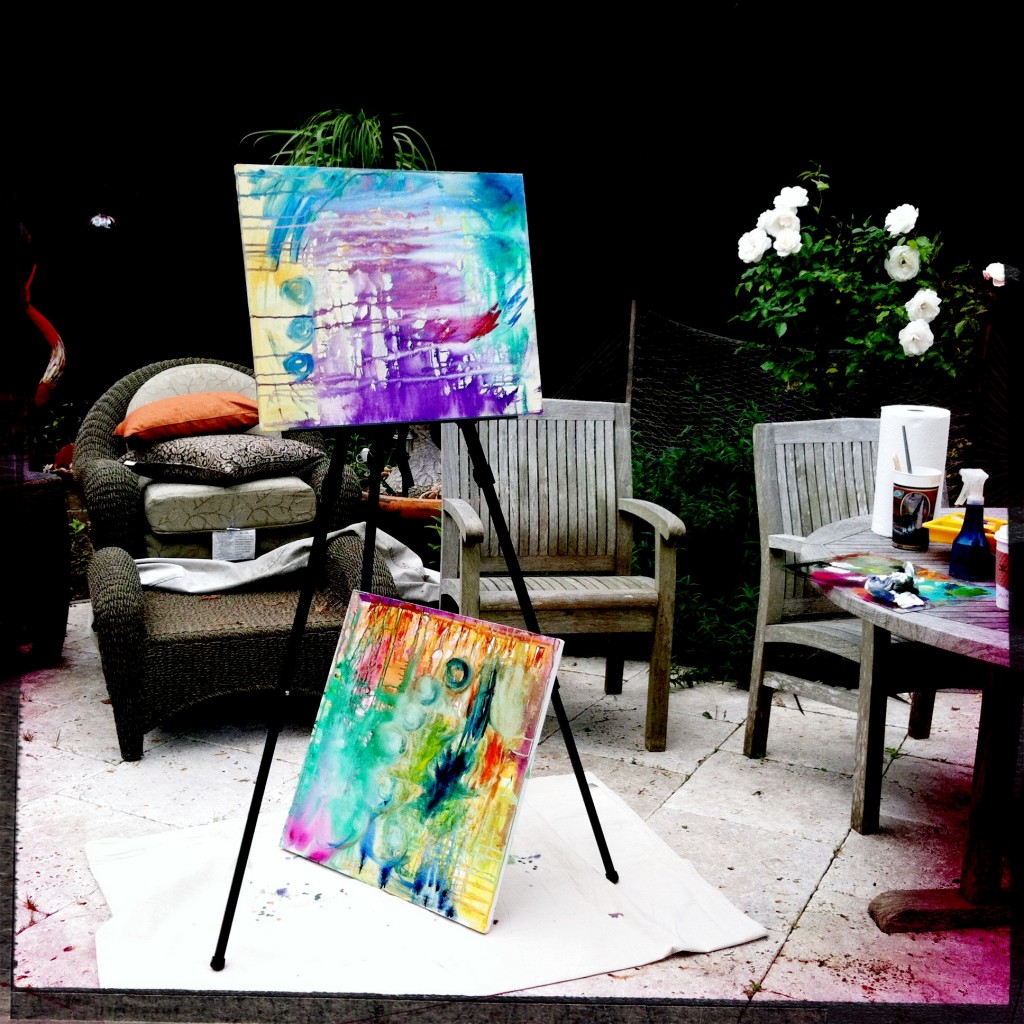 But this intuitive-no-plan-let-go business was still full of sh just as painful. 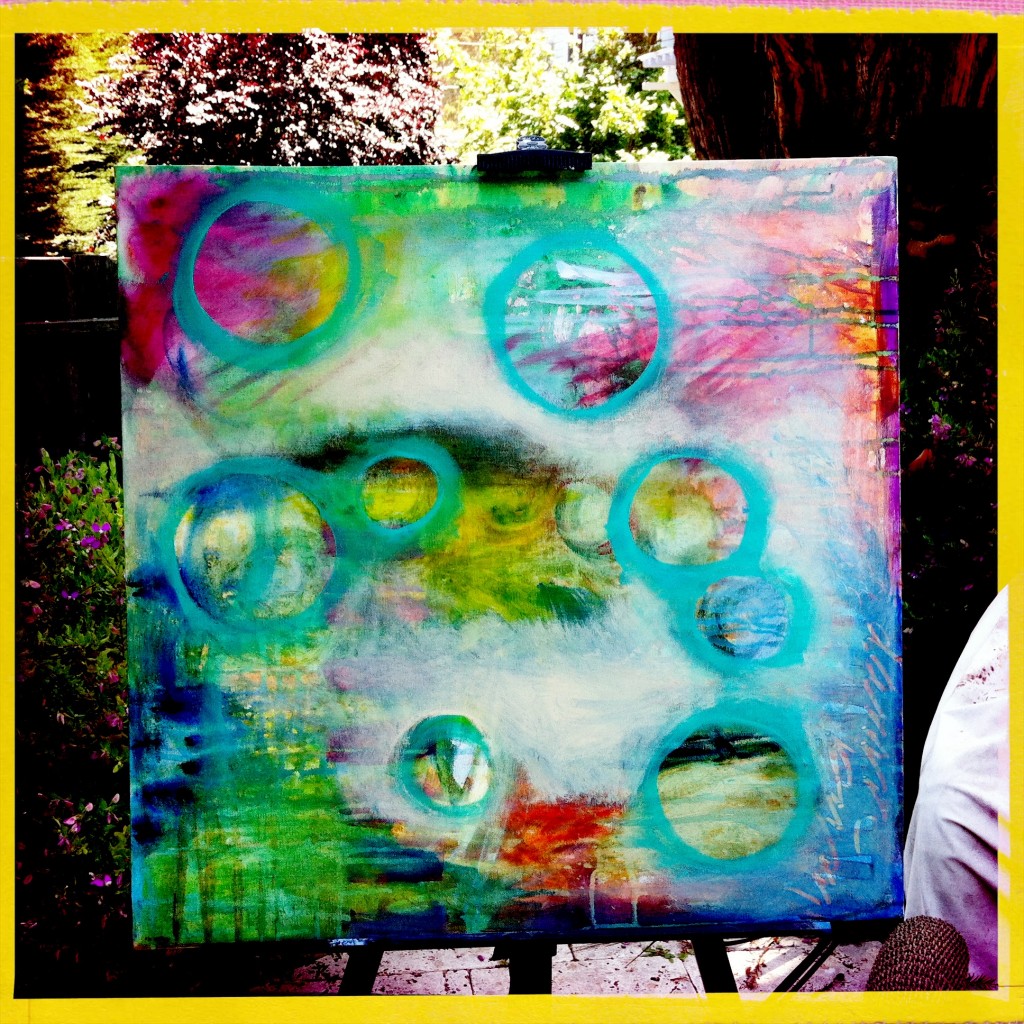 This stage isn’t too bad, but what I did after this was just god awful ugly. Insert discouraged artist sad face here.

So I took my canvases home and let them stew for another week. Started painting again and found a plan. Worked on it a second time and here is its current state on my easel: 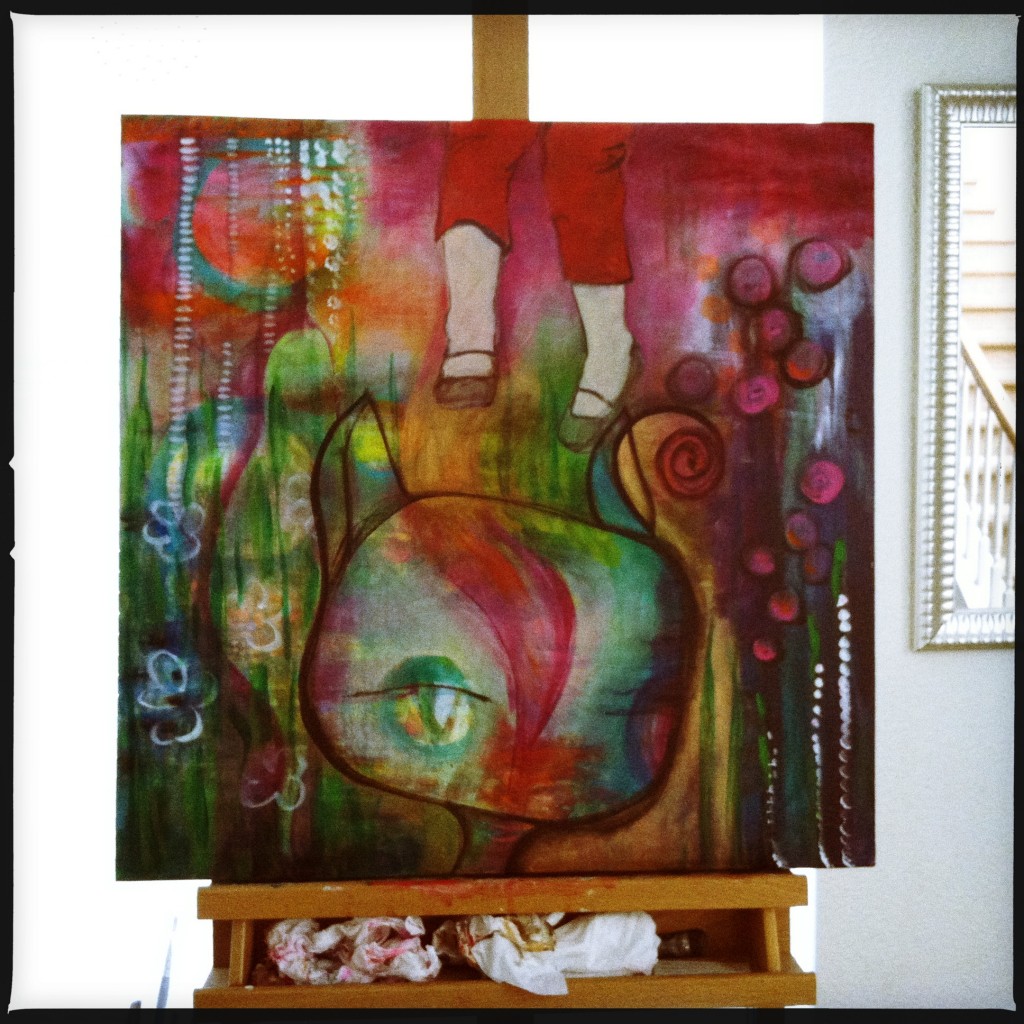 It isn’t done, but I know what I want to do to finish it. Just waiting on a “paint” day. And then I will inevitably screw it up!

Well, didn’t realize I was going to rant about past paintings, but there it is. And I will finish that canvas and then probably start another one. Why? Because I do see the value and fun in the technique. (I really like the finger painting!!)  And let’s face it, even with a plan I spend half my time pissed off at the painting and wanting to set things on fire, so why not?

And since your finger is probably tired from all that scrolling, I’ll save the on-line drawing class for another post. And it will be full of happiness and joy! Assignments, I like them.

Categories: I might be insane, Ya gotta have art!
Tags: art, death by art, drawing, Flora Bowley, letting go, only dead fish go with the flow, painting, techniques

And the walls go up day 2. #SlowlyFeelingBetter

And in local news: my PCR test result came back to

We have a slab!! And Chris has covid. Erin and I