When I was a kid my favorite dinner was ‘Beans and Dumplings’. Not only did I love eating it, I have fond memories of my mom making it. Sorting thought the beans, rolling out the dough for the dumpling – flour everywhere – cutting the dough into strips and then squares.
Beans and dumplings = happiness in a bowl.

I don’t remember my dad making Beans & Dumplings during my teens. I moved out (an act not directly related to the lack of Beans & Dumplings that I am consciously aware of). And then I took off to California. But whenever I went home to visit I would ask (more like beg and plead) for Dad to make them for me. And he would. But the dumplings were different. He didn’t roll them out into flat noodle-like squares. He would just add drop biscuits on top of the soup (yep, it’s really just white bean and ham soup, who knew?). And don’t get me wrong – it was still yummy in my book. But I really wanted those dumplings. I would ask him to tell me how to make them and he would say that he couldn’t remember. Ugh. Would I never have my childhood favorite again?!

And then – a kitchen miracle. I made Beans and Dumpling. With flat rolled dumplings!!! All because we left Santa Cruz a day early.

P had bought a ham to make for dinner on New Years Day. But when we decided to go home on New Years Eve she sent the ham home with us. Well. That ham sat in the fridge for another week while I would occasionally mutter something about having to cook that ham. Thankfully there was an entry for Holiday Ham in the 2007 edition of Cook’s Illustrated that Chris got for Xmas. And again Cook’s Illustrated held my hand through the scary process of essentially re-heating our pre-cooked spiral cut ham. Cook’s Illustrated told me to ‘throw away the pack of glaze that comes with your ham’ and provided me with a delicious glaze of maple syrup, orange marmalade, Dijon mustard, pepper etc. It sounds crazy but it worked! The ham was good. But damn there was a lot left over.

What’s a girl to do with all that ham?! I called my dad. “Dad, I have ham. How do I make Beans and Dumplings?” And do you know what he told me? My dumplings? Just flour and water. All those years and he couldn’t remember flour and water?!! Oh-kay then. Let’s not dwell on that. I was on a mission. He quickly ran through the process of making everything while I scribbled notes. I bought a rolling pin. And that Saturday I was as ready as I was going to get. Now you know that I only want to cook something when I have very specific directions and measurements. None of this “fly by the seat of your pants” “add a smidge” “to taste” “what ever I had in the pantry” kind of crap for me! So I was relieved to see that the directions for Bean Soup on the bag of beans pretty much matched the instructions my dad had given me. I just might be ok.

So, you’ll need a bag of Great Northern Beans (the grocery store only had ‘Small White Beans’. I tried to be brave). No need to soak them overnight – just sort though them, throwing out any bean that’s not up to snuff or that might be a rock, and rinse them thoroughly. 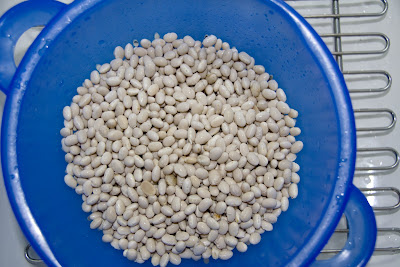 Put the beans in a large pot and cover with water. Water should be around 2-3 inches over the beans. Boil for 5-10 minutes and then turn off for an hour. Easy enough right?

While your beans are sitting there stewing in their own juices, chop up your ham – as much as your want – ugh! Chop up a yellow onion. And get ready to make a mess on your counter-top its dumpling time.

Hey – check out my new mandoline: 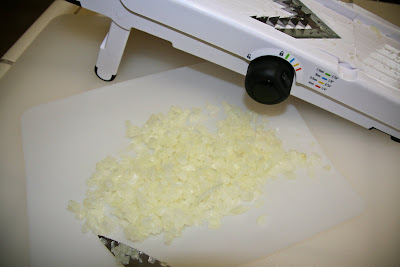 Flour the surface you are working on and make a ball of dough with you guessed it: flour and water. Dad said that I wouldn’t need to add any salt because of the ham – but in hindsight I would add a bit of salt to the mix. And no, I don’t know how much a ‘bit’ is! Now roll out the dough dusting the ball, rolling pin and counter with flour as you go. Don’t forget to roll the dough on a nice layer of flour of your dumpling will stick. Roll roll roll (you’re adding more flour as you go right?) until about 1/8 inch thick. Pull out your pizza cutter (or a knife) and cut dough into squares. Mine were about 1 1/2 inch squartangles (because of that sticking I mentioned). When the hour is up – throw everything into the pot! Turn the stove back on and season to taste. Dad recommends garlic, pepper, thyme and maybe even some oregano. Again he was vague. Oh and you might need to add more water. Maybe. 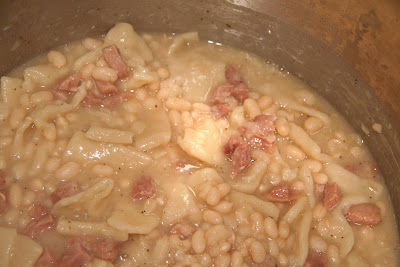 My notes say to cook for another hour. Only when we receive the phone bill will I know how many times I called my dad that afternoon. But, it was all so worth it in the end! 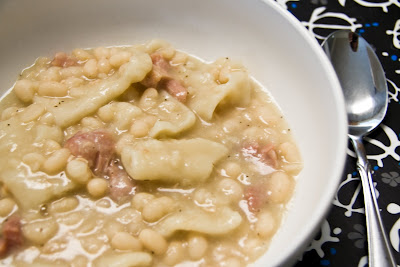 But I still have some ham left over…

6 thoughts on “Flour and Water… Doh!”

How it started vs How it ended Christmas Edition #

And that’s a wrap! Merry Christmas to all and to